The year my Dad passed away, I started a graduate program in Marriage and Family Therapy. In my first year, I realized how much early experiences in my life affected me as an adult. Not everything I discovered was new. I understood how events of my childhood – both positive and negative – influenced the choices I made, especially in relationships and raising my own children. What I learned was that my childhood traumas had a collective name: Adverse Childhood Experiences or ACEs. This is my story of how I overcame ACEs and their effects.

This post is made possible with support from the American Academy of Pediatrics through a cooperative agreement with the Centers for Disease Control and Prevention. All opinions are my own. Read my full disclosure statement here.

Some of you may be thinking “Good grief, you must have had an awful childhood.” Not at all. But I am a child of the 80s. Being a latchkey kid was a badge of honor. I walked myself to school and got paddled by the teachers for misbehaving. We learned about crime and drug abuse through prevention programs in school and summer camps. Those interventions have since been proven to increase crime and drug abuse.

Don’t get me wrong. I am not saying having those experiences automatically means you’ve had ACEs. Because it is also important to recognize that ACEs are potentially traumatic events. Each person who has these experiences does not view them in the same way or have the same outcomes.

It can be easy to assume that children who have ACEs have terrible home lives. That’s not a given either. Not all these experiences happen in the home or within the family. Two of my four came from people outside my family. 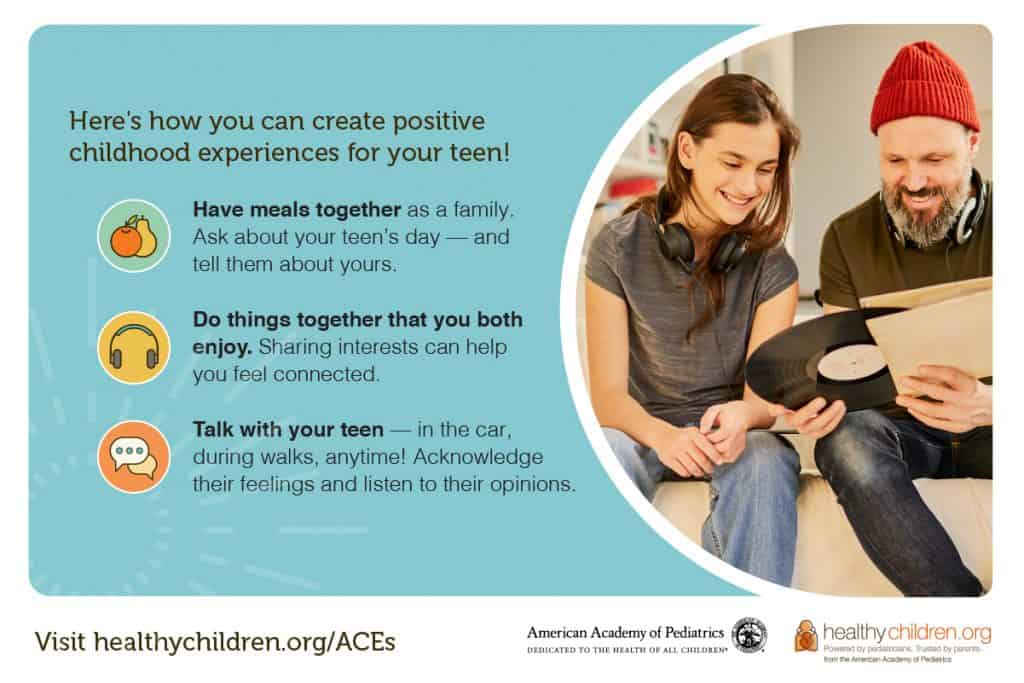 So, how did you overcome ACEs?

The American Academy of Pediatrics recommends several ways to prevent ACEs including:

When I think about what helped me overcome ACEs and the effects they could have had on my life I recognize the love, care, and support of the adults in my life were the most impactful. I was a complete and total Daddy’s girl and did (almost) anything he wanted me to do.

I also had several trusted adults outside my family who helped me overcome the effects of ACEs. The three that stand out the most are my fourth-grade teacher Sharon Kelly, my high school English teacher James Duggan, and my youth pastor Rev. Melvin Maxwell. Two of the three were able to join me in this open conversation on Facebook Live where I thanked them publicly for the positive contributions they made in my life.

The Trusted Adults in My Life

The ACEs I experienced as a small child affected the way I behaved. I wanted to be seen and feel valuable. I was smart and that would always earn the recognition I sought, but other times, I would act out to get attention. Mrs. Kelly saw me for who I was and guided me toward using my gifts and talents to earn that positive feedback.

Once she discovered I was a good singer, she helped me channel my energy into singing and performing. She believed in my talent and pushed me to be greater. I am sure I would have discovered my gift for singing at some point, but her influence came along at a time in my life when my attention-seeking behavior could have taken me down the wrong path.

My 10th grade English teacher, James Duggan, was and still is a favorite among my high school alumni. In addition to being a trusted source of support, he introduced me to two things that saved my life.

The first was the Alternatives to Violence in Schools program. It taught me self-assessment, conflict resolution, and self-advocacy throughout my sophomore, junior, and senior years. Learning to communicate my needs more clearly and advocate for myself kept me from many of the negative impacts my ACEs could have caused.

The second was Ntozake Shange’s poetic work For Colored Girls Who Have Considered Suicide When The Rainbow Is Enuf. The matter-of-fact, unfiltered descriptions of love, sex, and relationships from the point-of-view of “colored girls” helped me resolve the bitterness and anger I was carrying from my abuse. For Colored Girls gave me the courage to admit what happened to me, which was a major step toward my healing.

Rev. Maxwell made it cool to be a church girl. He was in his 20s when he led our youth group, which wasn’t much older than we were. He had street cred because he was from Brooklyn, and he seamlessly blended pop culture and faith. I looked up to him because he was an engineer, and my Daddy told me I should be an engineer.

Rev. Maxwell gave me a strong connection to my faith as well as a sense of responsibility and accountability. I felt a duty to my community to live up to the expectations that had been set and not to let them down. His influence changed some of the decisions I made when the choices could have led to a negative outcome.

How Can I Prevent ACEs?

It’s never too late to reduce the negative impacts ACEs can have. Anyone can help prevent ACEs by becoming a trusted adult in a child’s support system. As a mom of teenagers, I know there will be things my children do not want to share with me, so I always seek to create a support system of trusted adults they can confide in. As long as they are talking to someone and addressing what’s happening in their lives instead of turning to bad choices, I am totally OK that it’s not me.

Learn more about ACEs and their long term effects at bit.ly/learnaboutaces.