My girls were very interested in the 2016 presidential election. We watched the debates, listened to morning radio commentary, and Olivia even had a project for school. Alexandra’s school had a parent gathering to discuss concerns regarding the volatile nature of the campaigns and how it was impacting our children. No matter who you supported, I don’t think anyone can argue that this was an election season like one we’ve never seen.

A total non-politician, Donald Trump captured the country’s attention with his run for president.  His campaign was been non-traditional. He prides himself on not being a politician. And whether you love him or hate him—there really is no in between—there are some life lessons Donald Trump, and his candidacy can help you teach your children. 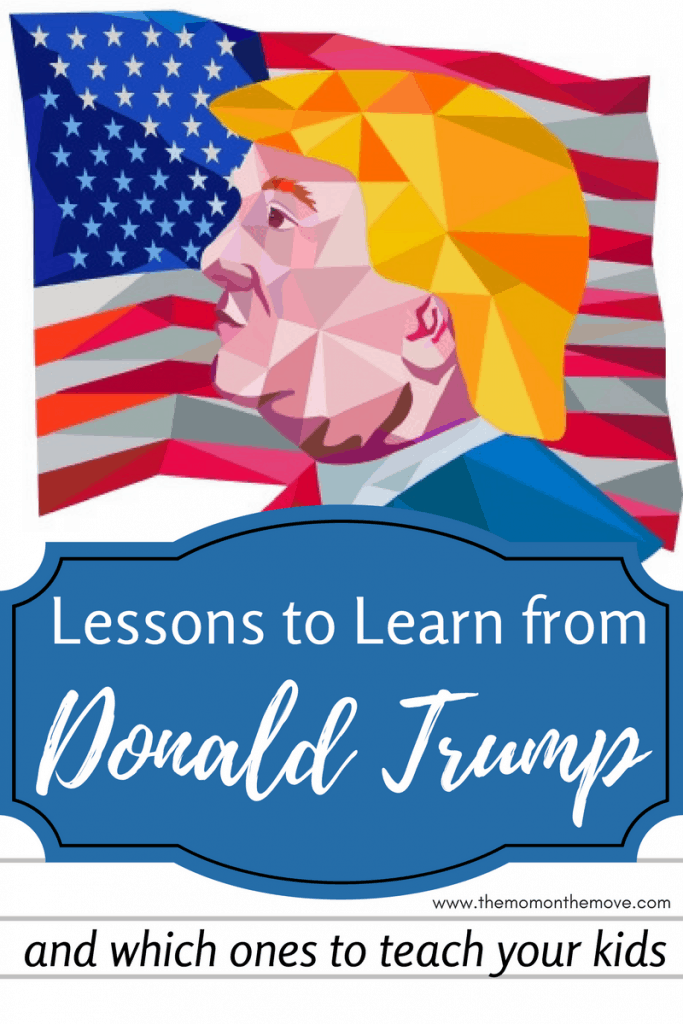 Believe In Yourself Even When No One Else Does

At the beginning of his campaign, no one thought Donald Trump would make it this far. Not his Republican Party opponents. Not the general public. A former director of The Make America Great Again Super PAC alleges that even he didn’t think he’d make it this far. And yet, here he is; the President of the United States.

There will always be people who don’t believe in your children’s dreams. Sometimes, you may even be the one who has doubts. Teach them that even in the face extraordinary opposition, stay focused on their goals. Who knows, they may end up becoming president someday.

How To Manage Emotional Responses

Mr. Sniffles. That’s what Alexandra called The Donald during every presidential debate. And while most people were annoyed or grossed out by the thought that he needed to blow his nose, I don’t believe that was the case.

Mr. Trump was known to interrupt his opponents during the Presidential Debates. Many people—liberal, conservative and independent—began to view him as impatient and inconsiderate. I believe the sniffing, which he only seemed to do during the debates against Hillary Clinton, was an effort to maintain his composure. He did not want to appear too harsh against a female opponent.

Embed from Getty Images
Emotional Intelligence theory suggests that forcing oxygen to the brain helps to slow emotional responses. Once triggered it takes only .08 milliseconds for adrenaline to flow and the fight/flight response to occur. Those deep breaths were a self-regulation tactic that everyone can benefit from using.

Help your children to understand what their triggers are. When they begin to feel out of control, have them take a few deep breaths. This will slow down their brain and body and give them time to think about what they are doing.

Once You Say It You Can’t Take It Back

Whoever said “sticks and stones may break my bones, but words will never hurt me” was wrong on ALL accounts. Just wrong. This campaign has made public many things Donald Trump said that he thought were private statements. This campaign has made some things public that I wish had stayed private. I think we all have learned, assume the mic is always on and assume the someone is always recording.

The following NSFW (not safe for work) video is a parody of just one “behind closed doors” statement that was made public. It’s been said that all press is good press, but I think this is a great lesson in being mindful to choose your words carefully. Or they will come back to haunt you. And once they’ve been said you can’t take them back.

What other takeaways have you shared with your children this election season?