Today, the city of Louisville says goodbye to Muhammad Ali. As a current Louisvillian, the life and legacy of Muhammad Ali has a major impact on our culture. My girls are native Louisvillians, born and raised. As we remember Muhammad Ali today, I am sharing three powerful life lessons I’m teaching my girls.

When Muhammad Ali, then Cassius Clay, was 12 years old his bike was stolen. Had this not happened, he may never have met police Sargeant Joe Martin. Martin, a boxing trainer, encouraged him to learn to fight before deciding to take on the thief in a fight. And so began the training that preceded his legendary boxing career.

There’s not much information on whether or not the bike was found, or if he continued looking for the thief. What we do know, is that he didn’t let the act of misfortune consume him. He took negative energy and channeled into something positive. I always encourage and inspire my girls to not let bitterness consume them.

Impossible is just a big word thrown around by small men who find it easier to live in the world they’ve been given than to explore the power they have to change it.  Muhammad Ali

Stand up for what you believe, even if it’s unpopular.

The courage of conviction is a phrase that can be used to describe Muhammad Ali’s character. In 1967 he refused to enter the U.S. Army draft famously stating, “I ain’t got no quarrel with those Vietcong.” He was anti-war and pro-peace. He didn’t believe that he should have to fight on behalf of a country in which he was still discriminated against. It was at the height of his career. He was convicted of draft evasion, fined, stripped of his titles, and banned from boxing for three years.

Having the courage of conviction to stand up for your beliefs is not an easy task. Especially when what you believe is unpopular. Even when I don’t agree, I do my best to provide the support needed to help my girls be courageous in their beliefs.

“He who is not courageous enough to take risks will accomplish nothing in life.” Muhammad Ali

Use your influence to help those who can’t help themselves.

Even with his fame and notoriety, Muhammad Ali was a great humanitarian. He believed in helping people who were unable to help themselves.  In 2005 the Muhammad Ali Center was opened in downtown Louisville. The center’s mission is to preserve and share the legacy and ideals of Muhammad Ali, to promote respect, hope, and understanding, and to inspire adults and children everywhere to be as great as they can be. 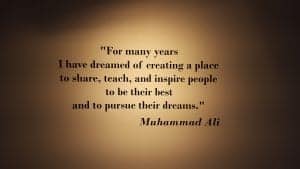 The center is focused around six core principles: confidence, conviction, dedication, giving, respect and spirituality. From being a leader in the classroom and on the track to starting the I Can Be Girls Confidence Conference, any one of those principles can be used to inspire my girls. My goal is to nurture and develop the compassion within them so they can share it with others, just like he did.