Representation matters. We’ve all heard it before and proudly proclaim it.  Especially when we see women and people of color in under-represented spaces getting their due. But even more important than those who represent are those who need to be represented.

As a young black woman in theater, Olivia is often one of the only brown faces in the room. So it’s important to me that she is knowledgeable of those who’ve paved the way for her. I made an intentional effort to expose her to shows with actors of color during her summer intensive in New York City. 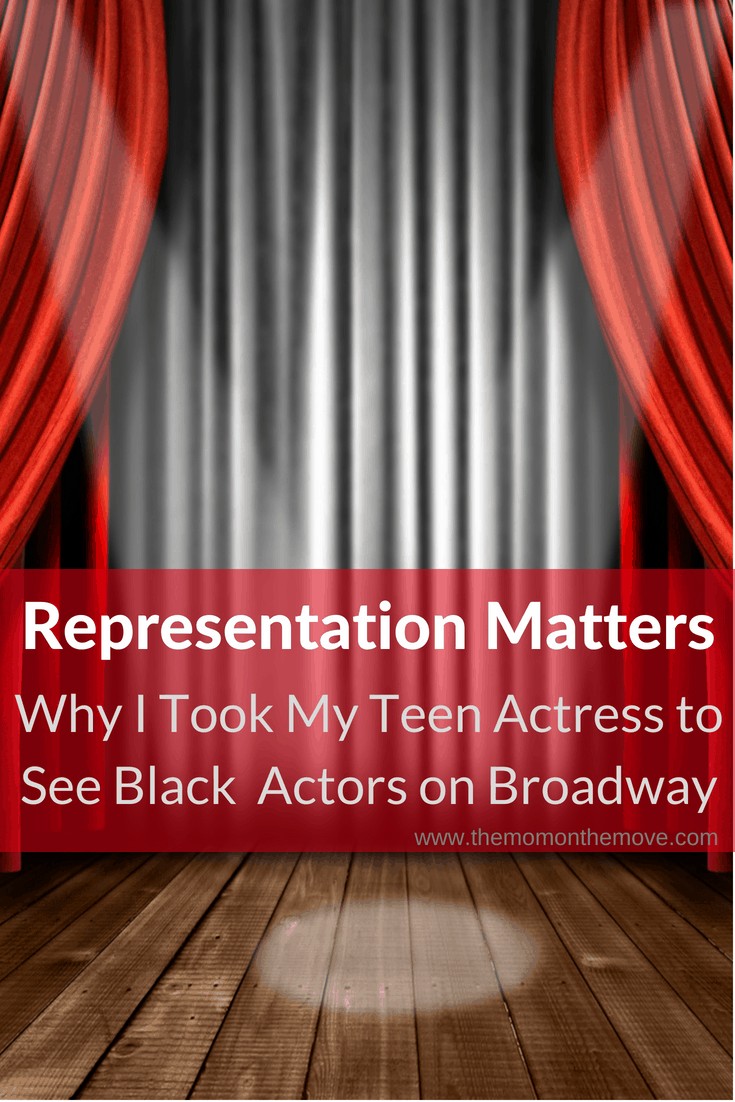 There are obviously shows written specifically for people of color. Stories that center on the experiences of black and brown people are important. They demonstrate the value in telling and interest in hearing them.

Olivia has not yet seen The Book Of Mormon (two missionaries try to make converts in Uganda) or the full production of The Color Purple (adaption of the movie and book by Alice Walker). But, she has played both Young Celie and Little TiMoune from Once On This Island. And she knows the entire soundtrack to Dreamgirls.

It always feels good to have an advantage, even if it’s racial. And in a field dominated by people who are not black and brown, it can provide a confidence boost.  Stories that have been adapted to feature black actors, like The Wiz and Carmen Jones, continue to be popular.

From shows with ensemble casts like Come From Away and SpongeBob SquarePants the Musical, to shows with large ensembles like Hello, Dolly more black and brown actors are showing up on stage.

In roles where race or ethnicity don’t matter, it’s easier to cast performers of color. Sandy Cheeks (Lilli Cooper) and Pearl the Whale (Jai’Len Josey) from SpongeBob are great examples of no one batting an eye about the race or ethnicity of the actors on stage. They are fantastic performers and deliver the essence of their characters perfectly.

Creating roles where race doesn’t matter takes steps toward leveling the playing field for actors of color. I want Olivia to understand that even if she starts in the ensemble, there is a place for her on stage. Because even when you have a racial advantage, there are only so many times you want to play a slave.

[bctt tweet=”I want my aspiring actress to understand that there is a place for her on stage. Because even when you have a racial advantage, there are really only so many times you want to play a slave.” username=”themomonthemove”]

Representation Matters Where You Don’t Expect It

Lin-Manuel Miranda caused quite a commotion among the theater world when a casting call for Hamilton went out seeking only non-white performers. Some feel it went too far, crossing the line of discrimination. Others applaud his creativity and bravery in telling that story in a way no one expected it.

Diversity on stage is still somewhat limited, but there have been strides in casting black actors when it’s not expected. I purposefully chose a balance of classic and modern shows to see on Broadway.  And when I saw Joshua Henry was playing Billy Bigelow in Carousel immediately added it to the list. Casting a black lead in a show that was written in the 1940s is highly unprecedented.

As of late casting directors are pushing the race envelope. Casting Jelani Alladin as Kristoff in Frozen is one example. Even though we didn’t see it, we waited two weeks to see if Black Anna (Aisha Jackson) would go on. Sadly, she didn’t get called up until after we left.

I need Olivia to see black and brown faces on stage in roles that weren’t created for black and brown people. It challenges the status quo and normalizes the notion that a performer is a performer, no matter their race. It also helps her feel normal when cast in those roles, like the time she was cast as Beth Bradley in The Christmas Pageant Ever.

How does representation matter to you in support of your high achiever’s dreams?